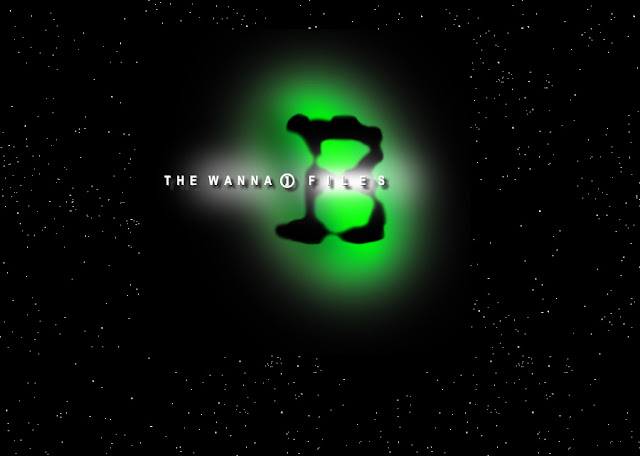 A gourd dancer from Chinle Arizona attending the 7th annual Indian world's fair in Tucson, Arizona related this account to our investigator Vox Skeptic. He gave this account:

After the Gourd dance, everyone cleared the arena and the Aztec dancers were about to perform. Before they could get set up, a strange creature appeared in the area. She was wearing a tie-dyed skirt, a Mexican blouse, a Guatemalan scarf and a floppy wizard's hat with big stars and moons on it. She had green fringed leather boots was wearing more silver and turquoise jewelry than was for sale at the whole Pow Wow. She had a unicorn painted on her forehead and her armpit hair was braided real nice in three neat rows. She started yelling "Blessed Be" and she runs out into the circle. She throws her head back, stuck her arms out and started to spin around. Then she did a couple moves from Madonna's Vogue video. Next thing you know she goes out of the circle and comes back with this six foot long wand with the biggest crystal I ever saw on the end of it. She started dancing around and swinging the wand at people trying to cleanse everybody of their negativity.

Her hair was bright orange. It was almost too bright to look. She was rotating fairly fast so I couldn't get a real good look at her. I looked over at the speaker's stand and the M.C. and the A.D. seemed to be frozen in time. No one was moving. Everyone was just frozen in one spot with their mouths wide open. It was as if the wannaB had paralyzed their brain muscles!

After she finished spinning, the wannaB slowly descended down towards the port-a-potties. She started speeding up and just shot off rapidly into the distance.

The next morning I said to my snag, "Did you see dat ting yesterday?" A bright rotating orange thing right in front of the speaker's stand?" Now whenever somebody says that they've seen a wannaB, I know it's true. I know it's true because I've seen one myself!
While looking for medicine in the Ottawa National Forest in June of 2002, a Lac Vieux Desert grandmother and her grandchildren were startled when they heard a loud and thunderous roar coming from a nearby clearing. The described the noise as sounding like a cross between a frat party and a pre-school after a field trip to a candy store. The followed the smell of marijuana to the area where the noise emanated and encountered a large group of wannaBs hooting and whooping in the style of a Hollywood movie. They creatures were banging on pots and pans and plastic tubs. One of the wannaBs approached the grandmother wearing nothing but a red and white striped cat-in-the-hat hat and offered a drag from the strange smelling cigarette he was smoking. He then tried to persuade her to give him some money so he could buy more cigarettes. Her dogs were frightened by the strange creature and tried to bite its leg. Some of the other creatures approached the group attempted to impersonate the children of earth. They claimed to be from the Rainbow tribe and advised the group that they were trying to affect a paradigm shift. They invited the grandmother to a tribal rave and asked her if she knew where they could obtain some hallucinogenic substances.

At this point, the grandmother and her grandchildren ran for safety. They returned to their reserve and did not venture out until the next day when they contacted the tribal police. Tribal police reported howling in the woods for months around the time of this sighting.

Agents Doubtful and Skeptic were notified of this case approximately two months after the occurrence. The creatures had abandoned the area, but out investigators did uncover many slant trenches, tons of waste, uncovered indigenous artifacts, strange piles of rocks, rolling papers and many Grateful Dead t-shirts. The meadow and wetlands surrounding the forest appeared to have been disturbed by a powerful force. However, the pattern of the disturbance did not resemble traditional crop circles.

Investigator's Note: The Drainbo is the most ecologically dangerous of all classifications of wannaB. Extreme caution should be employed when approaching this wannaB.

A witness at the Stomp dance relayed this account to Dana Doubtful:
"I was sitting in the bleachers with the spectators and I felt like I was being watched!"
"After listening to him talk about his vegan diet and his close personal relationship with the face on Mars, I lost all sense of time! I must have passed out from boredom. There's at least 20 minutes I just can't account for!

After a while, I managed to get up and go back to my family. They also reported a sense of losing time when they had listened to this wannaBs message.

He was wearing a purple t-shirt with a wolf on it and a woman's wedding necklace. He had white doeskin fringed leather boots on and a pigeon feather tied to his blond hair. He started talking about earth vibrations and all the Peyote ceremonies he attended. I felt like hours had past, but when I looked at my watch hardly any time had passed! Then he started talking about his high holy leader, Carlos Castaneda. I think I might have lost consciousness for a while. The next thing I remember he was talking about Billy Jack, Chief Dan George, reading Bury My Heart at Wounded Knee 100 times and Iron Eyes Cody. I can barely think about this! I lost almost 2 hours of my life! I don't want to say anymore. The experience was just too horrible!

A very forthright and excited witness was anxious to relay her account of her wannaB encounter. Here is her account:

During Grand Entry I kept hearing strange beeping sounds. During the prayer, I looked down and saw this odd creature completely covered in purple. She had on a purple fringed jacked, purple boots and a purple vest and she had a big purple rock around her neck too. She was holding a communication device to her ear and typing into another one at the same time. She called it a blackberry, but I didn't look like anything that I'd ever picked. AAAAYYYEEEE! Anyways, the only thing I could figure was that the cows where she comes from must all be purple. For the entire duration of my encounter this wannaB was only interested in talking to other wannaBs on her communication devices. We couldn't get her to be quiet for the prayer! Aja!

When asked to describe the wannaB the witnessed answered:
She was all stretched out with a very pointy nose, no color in her hair or skin and she didn't have a flat bottom. I don't think she knew the rest of us were even here. She was so into her technology ina? It was as if she was never really here!

All of the above accounts are true. The names have been changed to protect the smart asses who reported them. 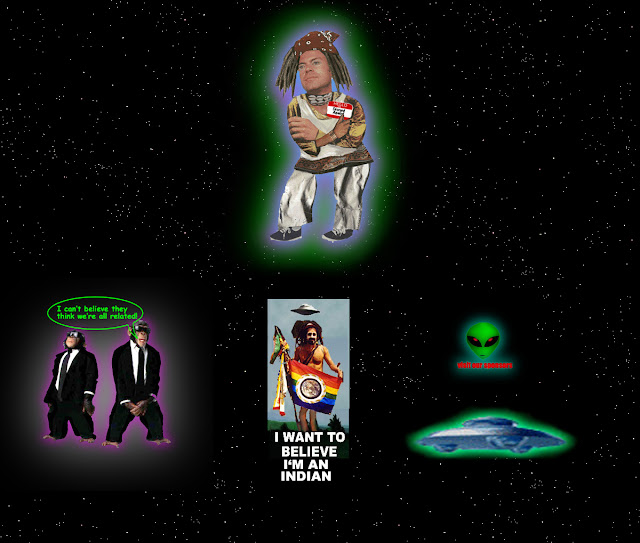 If you see a wanabee. Be very careful! Approach it cautiously, snap it's photo and send it in and we'll post it here. 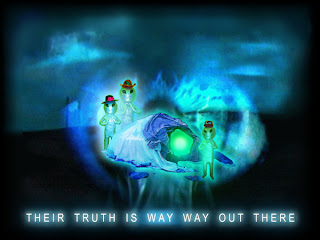 This blog is copy-lefted. That means that NDN cultural activists, skeptics and other assorted trouble-makers are welcome to snag anything on this site to use in any way that might annoy the individuals being satirized here.